You Have to Change It Up

In life, especially lately, we have to change things up A LOT.  For most folks, sheltering-in-place means an entirely altered lifestyle.  We do many of our daily tasks as before, but we do them differently.  (Conference calls dressed in pajamas below the waist, anyone?)

It’s the same with my painting.  I go back and forth between a very representational style and a very stylized, you-just-get-the-general-idea-of-my-subject-matter-but-the-rest-is-fly-by-seat-of-my-pants style.

Right now (and I’m not saying that this is due to SIP… but then again, I’m not NOT saying that…) I’m on a very stylized tangent.  It’s fun—it creates an entirely different set of problems to solve in the composition of a painting than the more representational stuff.  And, it allows me to figuratively play in the mud.  I get to do whatever I want to a degree—not very many rules, consequences are much less intense.  Kind of like the way we’re all living right now. 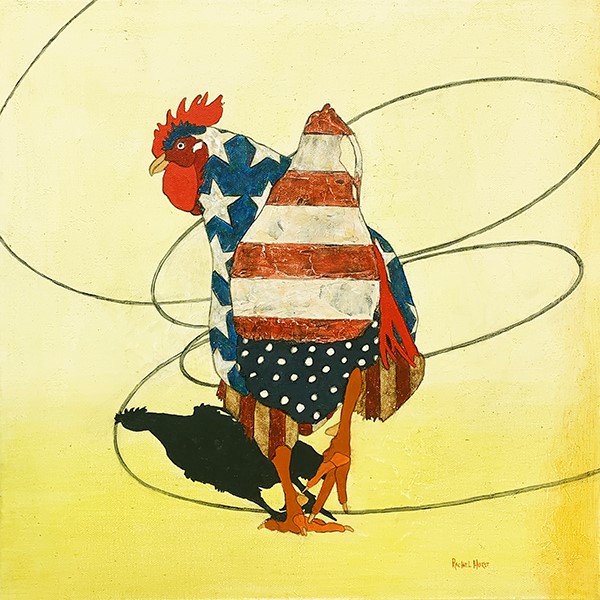 This painting is called “American Chicken.”  It started as a representational drawing, but as I was drawing the rooster the song “American Woman” came into my head—and STAYED there.  Not wanting to anger the art gods I took the hint—what began as a very traditional composition ended up being this fantasyland bird-fest.  And who doesn’t like a completely off the beaten path bit of poultry art now and then, eh?

I’ve had a lot of people ask me if it’s a social commentary.  It wasn’t done with that in mind… but hey, if it means something to you then I invite you to engage with it however you’d like!  That’s one of the cool things about any artform:  it means a million different things to a million different people.

This painting, and prints of it, are available on my website:  RachelHurstFineArt.com

Enjoy – and keep on rolling with the changes!

Previous
50 over 50: How My Life Looks Completely Different Now

Thank you for contacting us, we'll get back to you shortly.

Sorry, we are unable to send your message at the moment. Please try again later.